Everybody knows the familiar pedestrian crossing symbol. Here is a variant of it: 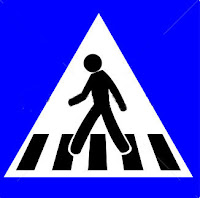 But in Uppsala, Sweden, it was decided that this symbol is sexist. Indeed, it shows a man crossing. But what about women? Are they not allowed to cross the road? Are they considered to be second-rate citizens? Surely not. So (I suppose after many deliberations, meetings with politicians, city planners, architects, engineers, the police force, statisticians, scientists and ecological farmers) Uppsala decided to replace half the signs by this one: 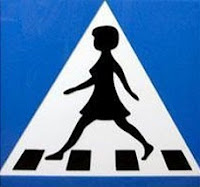 Apparently, other Swedish cities have done the same. In fact, this is something that was noticed by news agencies around the world some time ago. Look, for instance, at this article from the Russian Bокруг Cвета (Around the World).

The Swedish Road Administration (Vägverket) has decided to install new signs at pedestrian crossings replacing the traditional male figure Mr Pedestrian (Herr Gårman) by Mrs Pedestrian (Fru Gårman). It is reported in The Local. In Hässleholm in southern Sweden, town officials sought to erect their own ‘Fru Gårman’ signs in the name of gender equality.

So far so good. (Stupid me I hadn't even noticed the signs. The reason could be because I cross the road from wherever I feel like and do not necessarily use zebra crossings. In fact, I didn't even know there were zebra crossings. My excuse is that they are now covered with snow and ice.) But just now it was made known to me that the above depicted signs of Mrs Pedestrian are no good. Can you guess why?

I'll let you think before you answer. When you're ready, scroll down to see the answer. Warning: it is hard, so I'll give you a hint: Recall my earlier posting on Ultra-Orthodox Jews' behaviour towards an Orthodox Jewish girl who was seen walking down the streets of Beit Shemesh in Israel.
.
.
.
.
.
.
.
.
.
.
.
.
.
.
.
.
.
.
.
.
.
.
.
.
.
.
.
.
I guess my hint was enough, wasn't it? So you got it right? (Please let me know if you did!) The girl depicted in the revised pedestrian crossing sign (which, I suppose, was created after many deliberations, meetings with politicians, city planners, architects, engineers, the police force, statisticians, scientists and ecological farmers) depicts a woman dressed immorally: the skirt is short; the breasts are pointy, and (come to think of it) how are we sure that the woman is not topless? Is this Saint-Tropez or what?

So then the city has decided (I presume after many deliberations, meetings with politicians, city planners, architects, engineers, the police force, statisticians, scientists and ecological farmers) to replace Mrs Immoral Pedestrian with Mrs Proper Pedestrian: 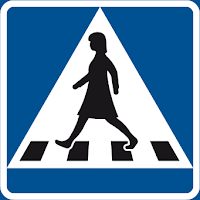 The proof is in today's article from Upsala [sic] Nya Tidning:

Mrs Pedestrian had a very short skirt, pointy breasts and widely open legs. Now the municipality installed new signs of a more properly dressed woman. Particularly offensive were the Mrs Pedestrian signs in the Stabby and Storveta districts of Uppsala. [The matter was apparently considered so revolutionary that] Mr Christer Åkerlund of Uppsala Kommun was interviewed by foreign journalists. "It was not easy", he said, "to figure out what the road terms are in English."

So, here then is what the Beit Shemesh gentlemen should do. Rather than spit on improperly dressed women, they should (by holding the appropriate deliberations, meetings with politicians, city planners, architects, engineers, the police force, statisticians, scientists and ecological farmers) introduce the revised Swedish pedestrian crossing signs. Improper/immoral signs belong to the past.

For the sake of civility.
Posted by Takis Konstantopoulos at 22.2.12