This is taken from BBC News:

A leading Egyptian scholar (Abdul Mouti Bayoum of al-Azhar University) has demanded that people caught importing a female virginity-faking device into the country should face the death penalty. He said that supplying the item was akin to spreading vice in society, a crime punishable by death in Islamic Sharia law; and that it undermines the moral deterrent of fornication, which he described as a crime and one of the cardinal sins in Islam. 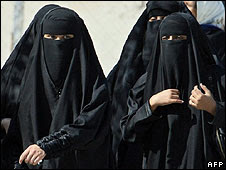 The device is said to release liquid imitating blood, allowing a female to feign virginity on her wedding night. The contraption is seen as a cheap and simple alternative to hymen repair surgery, which is carried out in secret by some clinics in the Middle East. It is produced in China and has already become available in other parts of the Arab world. The device is reported to be on sale in Syria for $15.

P.S. In the university where I work I see dozens of Islamic women wearing the veil covering their heads. (Men don't wear anything of the sort.) But for the first time this year I also saw female students with their faces entirely hidden, like in the picture above. I must admit I find it utterly disturbing. I cannot help but think that men of these societies treat women like objects. And women accept that....
Posted by Takis Konstantopoulos at 28.9.09 7 comments:

They [western powers] launched the myth of the Holocaust. They lied, they put on a show and then they support the Jews. The pretext [the Holocaust] for the creation of the Zionist regime [Israel] is a lie … a lie which relies on an unreliable claim, a mythical claim, and the occupation of Palestine has nothing to do with the Holocaust.

These are the words uttered by the Iranian president, Mahmoud Ahmadinejad, a couple of days ago, to his worshippers at Tehran university, during the Quds (Jerusalem) Day rally, the regime's annual display of solidarity with the Palestinians.

cried his supporters in unison. This is not the first time Ahmadinejad denied the Holocaust. His usual claims are these:

"I belong to the university, I am an academician. I am interested in a scientific approach. I raise the question: In WWII over 60 million people lost their lives. Were they not human beings? Why is it only the Jews we focus on? If this a historical event then we should conduct research on it to make sure it is a reality. Why is it those who ask questions are being persecuted? Whereas we can question God, freedom, democracy, we are not allowed to question the Holocaust. If this happened, where did it happen? Did the Palestinian people have anything to do with it? Palestinians leave under threat, losing their lives. You might argue the Jews have the right to have a government. But where? Not by displacing a whole nation."

It is easy to see that Ahmadinejad is totally irrational: The first thing he mentions is that he is an academic. This is the usual tactic of those who do not have real arguments; they use their "scientific hat" to impress the audience. Second, he seems to want to deny the Holocaust, not because of the event per se, but because of other crimes and deaths that took place during WWII; and because he "feels" for the Palestinians. The fact the Palestinians have no state is NOT a reason for denying the Holocaust. This is absurd; irrational. Third, he claims we are not allowed to conduct a scientific investigation on the Holocaust. He is ignorant. There is probably more evidence of the Holocaust’s details than for any other genocide in history. Not only we have survivors, we also have details written and recorded by the Nazis themselves who wanted to satisfy their weird perversions in trying to extinguish a people. Fourth, nobody, in a free nation (unlike Iran), prohibits anyone to question the Holocaust, Democracy, God(s), whatever. It is in his nation where people are not allowed to question certain things like Allah's existence, Ahmadinejad's right to be a president. All his claims about the "myth of the Holocaust" return to the same point: Give Palestinians a state.

I happen to agree that Palestinians should have a state. But what does this have to do with a historical event like the Holocaust? It is as if Ahmadinejad is saying:

"I am going to deny the Holocaust as long as Palestine is not a sovereign nation. When that happens, I will withdraw and, perhaps, withdraw my claims that Holocaust did not take place."

The science of psychology must have studied these kind of people: those who are stubborn upon an issue and will be stubborn and adamant about it until they receive the reward they want. Children act exactly this way, until their parents fullfil their favours. But Ahmadinejad is, as far as we know, an adolescent. Yet he behaves exactly like a spoiled child.

What's unique about the Holocaust? Michael Fridman commented on it recently. There are denialists of all kinds of things (genocides, wars, terrorist acts, etc) but the Holocaust, according to Michael, is unique. Because it is simultaneously the most well-documented genocide in history and the most denied one.

On a positive side, several protesters in Iran did not agree with Ahmadinejad. "Death to the dictator", they cried, while marching in Teheran. Strikingly, one of the strongest calls for opposition participation in the Quds Day protests came from Hojatolleslam Sayyed Hassan Khomeini, grandson of Ayatollah Khomeini, leader of the 1979 Islamic revolution. In a thinly disguised rebuke to the hardliners, Khomeini called Quds Day "a day for the oppressed to resist against the oppressors", implying that it is also a day of protest against repression and oppression in Iran.
Posted by Takis Konstantopoulos at 20.9.09 3 comments:

I borrowed this title from here. Read the post of Jason Rosenhouse first.

I'd like to add one (out of dozens) of my personal experiences about what constitutes knowledge. (Most of them stem from religious faith, others from sheer idiocy. The first category I've encountered mostly in Texas. The second category is universal.)

Back in 1992, a professor, call him C, at the University of Texas came to my office and told me that the local "expert" in probability, Gary Wise (who is now in jail, despite the fact that he was a good Texas, bible-studying guy, but he managed, you see, to shoot the dean's car) referred him to me when C asked Gary something about Poisson processes. So C asks me the question, also referring to me as "the expert in Poisson processes". The question involved a rather trivial (well-understood) property of a Poisson process: Namely, if we consider two successive points of the Poisson process we know that their expected distance is the inverse of its rate, but if, in addition, we know that these points contain a specific observation time (12 o'clock, say), then their expected distance is twice the inverse of the rate.

Prof C asks me if the above property of the Poisson process is correct because he thought it was incorrect whereas the students in his class thought otherwise. I say, yes, of course. He replies, "I don't believe that!". "Well, let me give you a proof", I say. "I don't want a proof; this violates my sense of causality", says C. I could not, for the life of me, understand what he meant by "sense of causality". I explained to him that whereas a Poisson process may be used as a model of a random phenomenon in time, mathematically time plays no role as such. It could be space or whatever. Prof C went on giving a speech about the sky, the stars and god. I apologised and said that I will not go into these domains and that the only thing I can give him is a mathematical proof. He did not accept this. He repeated he needs no proof. Before leaving he said, "OK give me a reference". So I told him to look it up in Feller's book.

For C, knowing was tantamount to seeing it written in a respectable book. For him, this is much better than a proof. I should not fail to mention that C is a born-again christian fundamentalist.
Posted by Takis Konstantopoulos at 18.9.09 2 comments:

Professors in the UK are required to act as police agents

A 3-page document originating at the United Kingdom Border Agency (UKBA) was distributed to us today. It outlines certain new procedures requiring teaching staff to be policing foreign students with visas and report them to the officials if they fail to come to classes.

According to the document, teaching staff are required to
1. highlight students at risk of missing 10 expected contacts
2. chase highlighted students
3. report non-attendance to UKBA.
By "expected contacts" they mean class or tutorial attendance, submission of homework, etc. So if a student misses 4 classes, 4 tutorials and 2 homeworks, then I must report him or her to the police. This is absurd because:
The UK is, as well-known, a surveillance society. A few days ago, the Sunday Times published an article reporting that

Britain has 1% of the world’s population but about 20% of its CCTV cameras; it has one camera for every 14 people in the country.

In another Guardian article, it is reported that CCTV is the worst of all possible worlds.

For some reason I cannot quite understand, the UK wants to monitor everybody at all times. And now they try to make people (professors) who are out of the game, get into it.

I DO NOT WANT TO BE A POLICEMAN.

So, why don't the UK officials install a few more CCTVs in each classroom to monitor the students they want? As a matter of fact, why don't they electronically tag each incoming foreign student, immediately upon entering, so that they can monitor his/her presence in lectures, tutorials, home or the toilet?

PLEASE KEEP ME OUT OF THIS POLICING GAME.
THE STATE MUST HIRE TRAINED POLICE OFFICERS TO DO THIS, NOT SCIENTISTS AND ACADEMICS.
Posted by Takis Konstantopoulos at 17.9.09 2 comments: