The Atheist Experience is a weekly cable access television show in Austin, Texas geared at a non-atheist audience. Every week they receive live calls from atheists and believers and what they say is hilarious. They are prime examples of the following dictum:

Two things are infinite: the universe and human stupidity; and I'm not sure about the universe. --Einstein

Here are some examples. Enjoy!

Example 1:
Caller 1: I hear peoplet alking about the Atheist Experience. You are a Marxist, you are an atheist, and you're from Russia.
Caller 2: So, you're saying you're a minister?
AE: Yes.
Caller 2: And you don't believe in God?
AE: That's correct.
Caller 2: Ha ha ha. Man, you're the devil man.

Example 3:
Caller 5: Hey, I got proof.
AE: Proof for what?
Caller 5: My explanation that the God is real?
AE: OK. Good.
Caller 5: My explanatation is, my mother was in the hospital, correct? Well, my correction.
AE: [Silence]
Caller 5 goes on to explain how his mother was to the verge of death, she stopped breathing, they take her downstairs, call us, and, all of a sudden she starts breathing! So what is that, mother nature doctors, or is it God?
Posted by Takis Konstantopoulos at 23.4.09 No comments:

"Anarchy does not rule"

From the front page of the Daily Express: 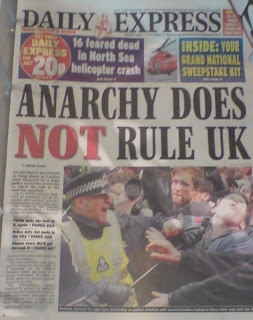 What? Say again! ANARCHY DOES NOT RULE UK.

Therefore, the phrase above is stupid. By DEFINITION, anarchy is the state of not ruling. The phrase is as stupid as saying "the colour of a red apple is red".

Well, this is deep waters for a STUPID tabloid like Daily Express. In fact, any UK newspaper that has the word "Daily" in its title is less useful than wrapping paper.
Posted by Takis Konstantopoulos at 16.4.09 No comments:

Although Edinburgh is, generally speaking, more enlightened than, say, the US deep South or the Turkish Adnan Oktar, we do have a bunch of unenlightened folk who try to convince others that Cristianity is synonymous to Science. They comprise the Edinburgh Creation[ists] Group. Their web page is fun. Whilst they declare themselves as "scientifically minded people", they are, really, a bunch of superstitious folk who cannot get rid of the deeply embedded psychological trauma of religion. Tortured by it, they declare:

Is science, or 'scientism', just as fundamentalist as religion, arrogantly claiming to know everything, or are doubts such as these a reflection of scientists' failure to make the case properly for what science does have to offer? Is this merely another case of the 'balance fallacy': the mistaken belief that even falsehoods should be given air time? Or should schools teach creationism in science lessons?

They believe that scientific facts, such as Biological Evolution is a falsehood and declare that science, like religion, constitutes a fundamentalism. This is unheard of.

They are disturbed by another bunch of loonies (although, in my opinion, those are more fun than creationists), calling themselves `Edinburgh pagans'. So they set out to

[investigate] the rise of Paganism in Edinburgh. Edinburgh was at the centre of the Enlightenment movement and was also the city where Charles Darwin was educated. During the Enlightenment in the 18th century, philosophers and scientists agreed that it was unreasonable to consider that God might be a cause of things. Whilst you might expect the result would be a very rational city, it seems the opposite has happened and Edinburgh appears to be one of Europe's most superstitious cities.

The very thing that is characteristic of Creationists, i.e. SUPERSTITION, is precisely what bothers them in those pagans. Apparently, the Edinburgh Creationsts want to be the only ones who embrace superstition. They cannot swallow it to have other folk being superstitious too.
They show us a video from the usual pagan carnival and want us to say: things in Edinburgh are so bad, that the only solution is God, Creationism, and pray. Pray for themselves, if they wish, but they should leave Science alone. It becomes dirty in their hands. Such people give a terrible name to Science and the Scientific Method.

They also ask Should school teach Creationism? And continue...

Although the Royal Society and much of the scientific establishment have denounced the teaching of Creationism, and the Royal Society's embattled director of education resigned last year after causing controversy by suggesting teachers should discuss Creationism in class, a recent MORI poll revealed that over 40% of the public believe that creationism or ID should be taught alongside evolution in school science classes.

If the figure is correct, then it is even more compelling to oppose pseudo-science.

Well, NO, schools SHOULD NOT TEACH CREATIONISM IDIOCIES, just as they SHOULD NOT TEACH ASTROLOGY. And it is right that the Royal Society denounces this creationism/intelligent design charlatanism. If the moment of time arrives when an Academy of Sciences promotes superstition and pseudo-science then it will be too late. Their backwards ideas will have won and we'll be heading straight on to Middle Ages again.

Let's do an exercise. John Baez has published a Crackpot Index, i.e. "[a] simple method for rating potentially revolutionary contributions to physics", but, with a few obvious changes it applies to other sciences too. It's an easy exercise to see how many points the Edinburgh Crackpots (also known as Creationists) score. I think that they can do the maths too (and need not use the the theory of Evolution which they so much despise, although the very fact that they can do the maths IS a result of Evolution; give or take a few more million years and chimps will be able to do the same maths).
Posted by Takis Konstantopoulos at 1.4.09 No comments: