What is mathematics (education) for?

Underwood Dudley, in a critical article in the latest Notices of the AMS, states it accurately:

What mathematics education is for is not for
jobs. It is to teach the race to reason. It does not,
heaven knows, always succeed, but it is the best
method that we have. It is not the only road to
the goal, but there is none better. Furthermore,
it is worth teaching. Were I given to hyperbole I
would say that mathematics is the most glorious
creation of the human intellect, but I am not given
to hyperbole so I will not say that. However, when I
am before a bar of judgment, heavenly or otherwise,
and asked to justify my life, I will draw myself up
proudly and say, “I was one of the stewards of
mathematics, and it came to no harm in my care.”
I will not say, “I helped people get jobs.”

Posted by Takis Konstantopoulos at 29.4.10 No comments:

http://www.forvo.com/ is a website which contains pronunciation sound clips in many different languages. As of January 2009, Forvo.com is the largest pronunciation guide website on the internet. All sound clips are created by users.

I am interested in the pronunciation of Swedish, so I use: http://www.forvo.com/languages-pronunciations/sv/. Words (and phrases) are arranged by category, popularity or alphabetically.
Posted by Takis Konstantopoulos at 27.4.10 No comments:

A friend/colleague of mine has come up with the following wise saying:

The hallmark of a third-rate university is that they hire second-rate administrators with first-rate salary.

This came to my mind, recently, when I read this:

UNIVERSITY principals were accused of hypocrisy today after figures revealed they were given big pay increases while staff are facing redundancies.

Mary Senior, of the University and College Union, said: "It is hypocritical to give themselves large rises while giving a ludicrous offer to the staff who do all the work."

A spokeswoman for Heriot-Watt said: "Principal Muscatelli joined on £160,000, a modest salary within the sector. By the start of 2008-9, he had implemented a visionary new strategic plan."

Posted by Takis Konstantopoulos at 27.4.10 No comments:

The second law of thermodynamics is against the Bible

Several years ago, the members of the Christian Coalition of America, headed by a certain Ralph Reed, stated:

"We don't like the implications of [the second law of Theormodynamics], and we will not rest until it has been reversed in the courts."

"What do these scientists want us teaching our children? That the universe will continue to expand until it reaches eventual heat death? That's hardly an optimistic view of a world the Lord created for mankind. The American people are sending a strong message here: We don't like the implications of this law, and we will not rest until it has been reversed in the courts."
"Why can't disorder decrease over time instead of everything decaying? Is that too much to ask? This is our children's future we're talking about."

"My daughter's schoolbooks tell her that we live in a world ruled by disorder. That's a direct contradiction of what it says in the Bible, about how everything is going to get better, and we'll all live happily up in heaven after the End Times."

"This is America, and in this country, we have the God-given right to change laws we don't think are Christian. We are united in our demands that the second law of thermodynamics be repealed, and our voice will be heard no matter what. That's just a plain fact, and nothing anybody says can ever change it."

This is the kind of idiocy requires no further comments.
[Credit to a Nadder! ]
Posted by Takis Konstantopoulos at 26.4.10 4 comments:

A picture is worth a thousand words (courtesy Yuval Peres). 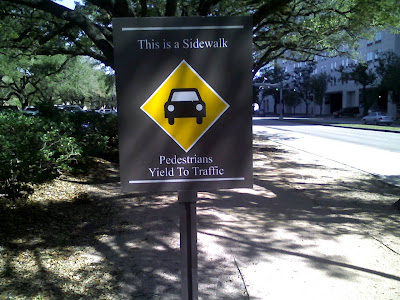 Posted by Takis Konstantopoulos at 8.4.10 No comments: