The scale of the universe

This nice java simulation was not available when I was a kid. I wish it were.
Click on the picture to find out. 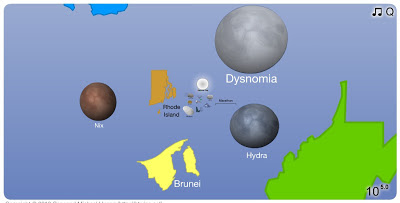 What's even nicer is that this simulation was developed by two kids, Cary and Michael Huang, from Moraga, California. I will suggest it to many adults who don't have a feeling for orders magnitude. Check their site too.
Posted by Takis Konstantopoulos at 22.10.12 No comments:

The moral man will roll up his sleeves and use force

This recent New Yorker article on the Penn State pedophile Jerry Sandusky came to my attention through a nadder:


The key point is that someone who really wants to rape children will spend a LOT of energy in building up a charismatic persona of the helpful member of the community. An interesting (and useful) read that should dispel the trenchcoat-wearing loner with no social skills as the archetype child sex predator.

It reminded me of two things, first the classic verse from Chapter 38 of the Te:


The kind person acts from the heart,
and accomplishes a multitude of things.
The righteous person acts out of pity,
yet leaves many things undone.
The moral person will act out of duty,
and when no one will respond
will roll up his sleeves and use force.

Secondly, the issue of pedagogical education.

There is much in common between a pedophile, dressed as a charismatic person, a helpful member of the community,  a likeable individual, like Sandusky, and one who claims to be so caring about education that he or she devotes his or her career on the subject, going around teaching others how to educate pupils and students, offering pedagogical approaches, while always maintaining his or her love for education.

What is the common point between the two types is the fact that none of them care at all about what they preach. On the contrary, they try to build an impeccable facade in order to do exactly the opposite. This has always been so obvious to me that I thought it was obvious to others as well. Wrong. I keep meeting people around me who claim that because this or that person is a moral individual, beyond any suspicion for dubious acts, then this is a proof that he or she is actually what he or she appears to be. I also keep speaking to people who are convinced that because that individual is a master in pedagogy, then, certainly, all he or she cares about is the improvement of education.

Lao Tzu warned us a few thousand years ago. Beware of those who have the need to tell everyone that they act out of morality and build a picture about themselves which is impossible to destroy even when dubious things start happening.

Sandusky has always been beyond any suspicion. Playing the role of a lovable goofball, he was never ever going to be suspected for molesting children. Much in the same way, the pedagogical educator who spends 200% of their time in preaching and teaching and applying pedagogical concepts is never going to be suspected for someone who does not give a shit about education. Both Sandusky and the pedagogical educator devote years in building indestructible fortresses.

Our way of seeing things should change: beware of those who preach, look behind the surface, and, more importantly, always question anything that is being offered to you as perfection. Is this so hard? I never thought it could be. And yet, in societies where freedom of thought is not something that individuals practice ("sapere aude" is not obvious) there will always be Sanduskys and other crooks.
Posted by Takis Konstantopoulos at 19.10.12 2 comments:

Listen to the BBC broadcast here, and read this article from the UK Column.
Posted by Takis Konstantopoulos at 15.10.12 No comments:

Recursivity: "This insult of the Prophet will not be allowed."

Recursivity: "This insult of the Prophet will not be allowed."
Posted by Takis Konstantopoulos at 15.10.12 No comments:

IKEA in Saudi Arabia and the rest of the world: double standards?

Everybody has by now seen the scandal that IKEA created by removing women from its catalog in Saudi Arabia. At home, things are very different, as my most viewed posting exemplifies. But the Swedish company IKEA didn't really apply Swedish (and, really, universal) standards of treating humans equally. They decided, for profit reasons obviously, that they should comply with the anachronistic, offensive, stupid, fascist, oppressive rule of a theocratic state, Saudi Arabia, namely, that women are second-rate beings (for religious reasons--don't forget) and remove them from their catalogs:

The question then is this: If we have democracy at home, and certain consequences of it, do we forget it when we go abroad in order to be "nice" to (or make profit in) a dictatorial theocratic regime?
Posted by Takis Konstantopoulos at 6.10.12 1 comment:

It is not clear, as I maintained in the past, whether Greece is a theocratic state or not. A recent event confirms this in the affirmative:


A 27-year-old man was arrested in Greece for blasphemy against famous Greek monk, Elder Paisios, Business Insider reported.
Paisios, an Orthodox monk from Cappadocia who died in 1994, [is] highly venerated in Greece and Russia, and formal canonisation as saint in the near future has been speculated.
The unnamed suspect set up a Facebook page using the mocking name Geron Pastitsios, which is a Greek pasta dish.
The arrest was agitated by neo-Nazi Golden Dawn [neo-fascist] party, according to some Twitter users.
Three articles of the Greek Penal Code punish whoever "by any means blasphemes God". Article 199 states that "who publicly and maliciously and by any means blasphemes the Greek Orthodox Church" shall be punished "by imprisonment for not more than two years".


In 2003, an Austrian writer, Gerhard Haderer, was prosecuted for his book The Life of Jesus, which reportedly portrayed Jesus as a hippie. He was acquitted in 2005.

Elder Paisios is the favourite persona of many reactionary, white supremacist, conspiracy theorist, extreme right-wing Greeks, the prototype of whom being a certain Dimosthenis Liakopoulos who, maintains, among other things, that Elder Paisios has prophesied about the future of Greece, that Vladimir Putin follows Paisios' teaching and is a big brother for Greece, and has many conspiracy theories and explanations about everything, maintaining a conspiracy page. Oh, yes, he also maintains that Greeks are supreme beings because they came from outer space. A few years ago, a blogger was arrested in Greece for linking a blog which was making fun of Liakopoulos.

With the rise of the fascist movement in Greece, due to the financial crisis, the rise of such arrests are growing. It is an alarming phenomenon. The linking of the extreme right and religion has always created big problems.

Freedom of expression is suppressed in Greece.

In 2007, there was a performance, in Athens, of the well-known (musical?)  "Jesus Christ Superstar" of Andrew Lloyd Webber. The person in charge of the performance was sent to court. He was acquitted, but he faced threats and insults.

Yesterday, a crowd of Greeks protested against the upcoming performance of  "Corpus Christi" by Terrence McNally.


Thirty angry religious Greeks, with icons of saints in arms, among them some priests, and with the assistance far-right group, with Greek flags in their hands, appeared Thursday evening at the theatre in order to prevent and stop the performance Corpus Christi scheduled to take place next week.
[Fortunately] the court ruled against their will.
But the protesters were not happy with the decision. They went to the theatre and demanded that the announcements of the performance be taken down amidst signing of Byzantine hymns and the Greek national anthem.

The line between what is considered blasphemy or not is, in Greece, fine. Sometimes the state will punish you, sometimes not. But in any case, you will face the anger of [certain] people who will not leave you alone.
Posted by Takis Konstantopoulos at 5.10.12 No comments: