I performed the following experiment with students of mathematics. I showed them a map of Russia on google and took a point very far to the east (Uelen, a village in the Chukotsky District next to the Bering Sea) and a point very far to the west (Venekyulya, a region in the Leningrad Oblast, at the border with Estonia). The distance between Uelen and Venekyulya is, roughly, the largest distance between two points in Russia, which is about 6000 km. I asked the students to draw a path between Uelen and Venekyulya whose length is 6000 km. Some drew the path P1 shown below which is a straight line between Uelen and Venekyulya on the google map. Others, realizing that the map is a projection of a sphere, drew path P2, slightly curved upwards. 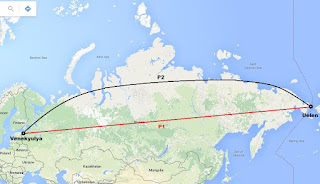 When I showed them the actual path (see below), they were all surprised. They thought it was wrong. How can it be that the "straight line path" is so much curved upwards? Well, that's because the distortion of the map increases very rapidly when we move away from the equator. 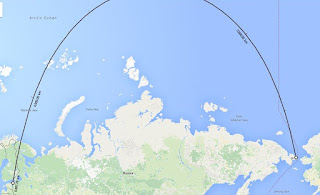 If I had shown them the actual map, on a sphere, then they would have known what to do: they would have drawn an arc between Uelen and Venekyulya that is part of the unique great circle between them, that is, the circle centered at the Earth's center and containing Uelen and Venekyulya. This arc almost (but not quite) passes from the North Pole. To see this, we need to look at the Earth downwards from the North Pole. The picture then becomes clear and the apparent contradiction is resolved.
The moral of this is that we should never believe what we see. (In fact, we should never believe in anything.) Only when we have further evidence, provided by experiment, measurements, or mathematical proof should we "believe" what we see. But then the verb "believe" becomes irrelevant; at this point, we know, we do not believe. We may believe something, temporarily, until further evidence, or we may believe something because someone else we trust has done the work for us. But we should never believe something because our eyes saw it, or because a teacher once told us, or because the government or administration says so, or because a religious, for example, book writes.

One thing that bothers me with some students (and some teachers) of mathematics is that they may be comfortable with the geometry of a 5-dimensional hyperbolic space because they may have seen it in class, passed an exam on it, or doing research on it, but may be uncomfortable with down-to-Earth [sic] geometry, including knowing 2-3 proofs of the Pythagorean theorem. O tempora o mores!
Posted by Takis Konstantopoulos at 15.2.16 1 comment:

Earlier this year, Vanessa Redgrave praised Greek islanders for helping  refugees arriving en masse in Aegean islands such as Kos. It was suggested that the Nobel peace prize be given to Greek islanders who "since the very beginning of the refugee crisis, fishermen, housewives, pensioners, teachers -- ordinary residents of the Greek islands and other volunteers have opened their homes and hearts to save refugee children, men and women fleeing war and terror."

And now, there is a petition on the internet  about this. A petition launched by a Avaaz is asking for the Nobel Peace Prize to be awarded to these unsung heroes

Greece does not have the means to police its borders. It's in a deep financial crisis, instigated by previous corrupt governments in cooperation with the European Union lenders who turned the blind eye when "checking" obviously fake balance sheets. Nevertheless, at the individual level, and despite the rise of neo-Nazis, many Greek islanders are indeed doing as much as they can--and more--to aid the refugees, at least those who arrive alive.

In the opposite direction, EU gives Greece warning to fix border 'neglect'. Easier said than done, of course. There is no money. Greece is cutting down on police forces because they can't pay them.

The Nobel peace prize would be a good gesture but we should keep in mind that this prize is quite controversial: it has been given to people and organizations supporting violence, to others who have been directly responsible for the deaths of hundreds or thousands, to corrupt people, and has been largely politically motivated, i.e., a Nobel peace prize award is often given as a statement of whom the world should consider as proponent of peace, not the one who actually is. Here are some very controversial Nobel peace prizes:
2012: European Union (really?)
2010: Liu Xiaobo (who, basically, is a voice of American-style democracy, including support of US-initiated wars)
2009: Barack Obama (who me? he said, but he accepted it)
2004: Wangari Maathai (who claims that AIDS was invented by first-world scientist in order to depopulate Africa)
1997:  Jody Williams (for her work in banning anti-personnel landmines but isn't it Dyno-Nobel who makes landmines?)
1994: Yasser Arafat, Shimon Peres, and Yitzhak Rabin (could that be a political statement? duh!)
1989: The Dalai Lama (paid directly by the CIA in the 60s)
1979: Mother Teresa (who let people die as they would go faster to paradise; read Hitchen's "The Missionary Position")
1973: Henry Kissinger (probably, the most ridulous peace prize ever given; again, read Hitchen's "Trial of Henry Kissinger")

To summarize, Greek islanders will welcome the prize even though it's a controversial thing. At the same time, EU should make up its mind: support the islanders get the prize or punish them for not doing enough. At the minimum, they should be helped. Those people in Kos who risk their lives to help half-dead immigrants are not the ones who stole public money and led to the crisis. Those who did are still enjoying their loot.

Posted by Takis Konstantopoulos at 1.2.16 No comments: