Why are people afraid to ask

It occurred to me, again, today, to consider the question. I was attending a conference and, during a break, there was a discussion about class hours. It was mentioned that in some university in the US they used to schedule all classes for 80-minute long periods and that this posed problems with scheduling and keeping regular time tables. Be it as it may, the conversation was turned into how to divide the 60 minutes of an hour into smaller intervals. I mentioned that, unfortunately, we are still stuck with the system created by the Babylonians who introduced the sexagesimal system in artithmetic. (That is, they counted using base 60, instead of 10. So, for instance, they had to learn multiplication tables which were of size 60*61/2=1830, instead of 10*11/2=55. They had good reasons for doing so, for 60 has a large number of divisors: 2,3,4,5,6,10,12,15,20,30.)

The interlocutors were puzzled: "what are you talking about"?

I explained that we are stuck with a non-decimal system of counting time and angles precisely because of this historical accident. It would be nice, I maintained, if at some point we changed it.

Their reaction was that this is impossible. To them, who probably never thought of even considering the question, it was impossible because it has always been so.

I explained that there was nothing fundamental with it and so it could be changed, if there was some kind of agreement. After all, it's a unit of measurement, just like miles and kilometers. It was interesting to observe, again, that they were willing to accept that, albeit difficult to change, it is not impossible. I asked them to consider the difference between a convention (such as the choice of a unit) and a fact, such as Newton's law-at low speeds, the rotation of the Earth around itself and the Sun (I mentioned that there are some stupid people who think that the Earth is still) or the principles of General Relativity. One of the conference participants claimed  that the latter makes absolutely no difference in practice. At which point I reminded them that the Global Positioning System (GPS) does take into account relativistic corrections.

The conversation proceeded to talking about the difference between a convention and a fact. And I realized, once again, that the two concepts are confusing for many people.

Therefore, it is not surprising that, when fundamentalists with rhetoric abilities appear, they can attract lots of followers and create cults. Or that politicians can do whatever they want for their own benefit.

People impose boundaries to themselves by not allowing themselves think freely, by imposing limitations on their thinking process, by enslaving themselves.
For many humans, the Enlightenment did not exist. It's irrelevant. Alas, despite Kant's message, Sapere Aude (have courage to use your own reason) there still are many who, not only cannot think freely, but won't even consider the possibility that their thinking is accompanied by heavy chains.
Posted by Takis Konstantopoulos at 26.3.11 4 comments:

Time for a break: here is a small collection of funny signs from Greece. I have collected them from the Internet. 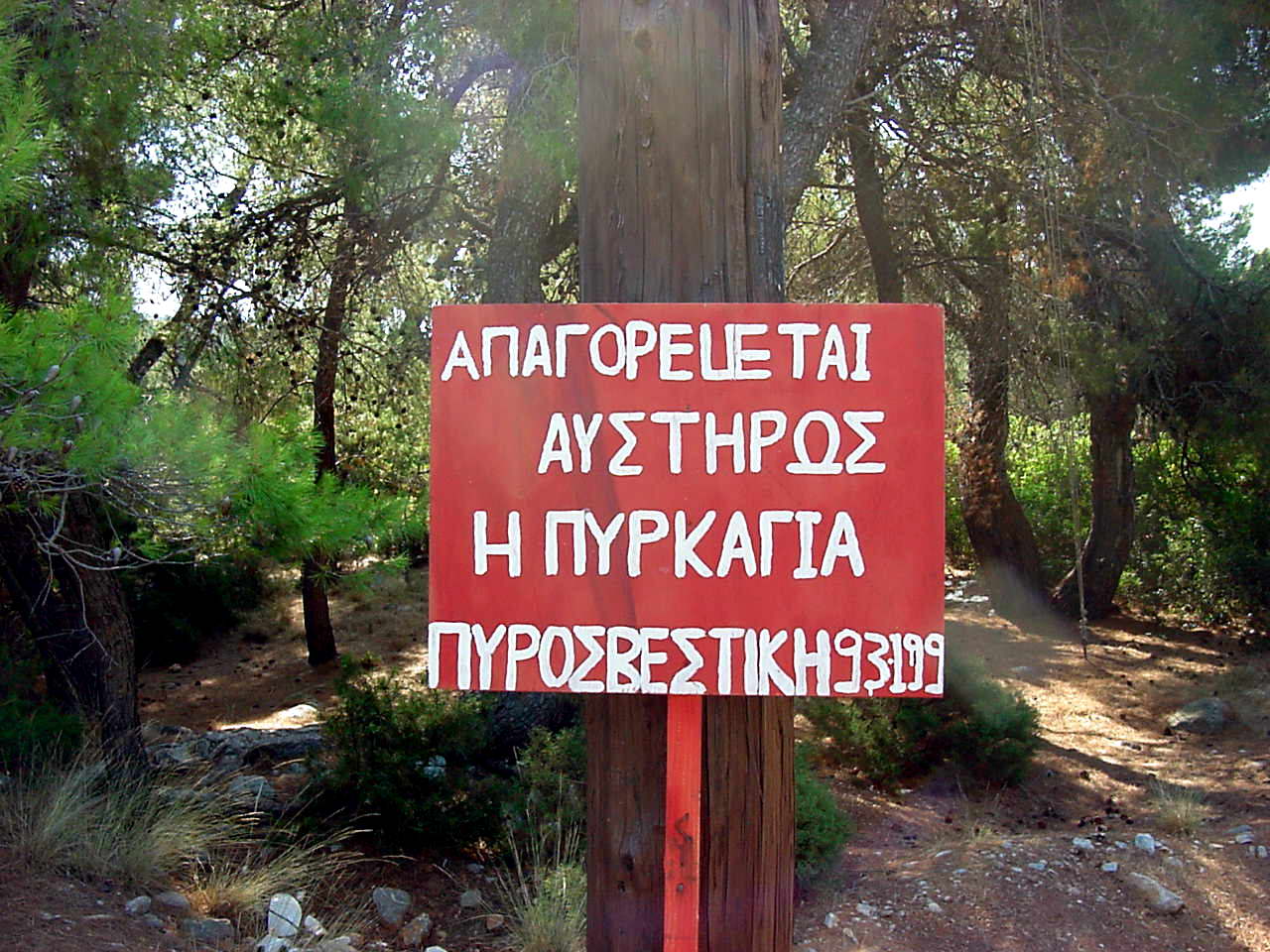 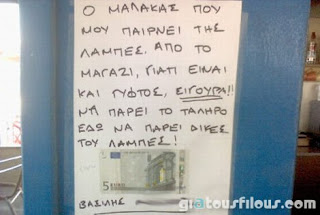 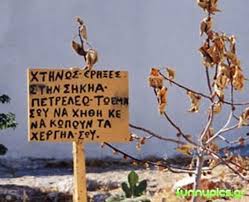 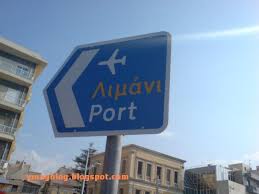 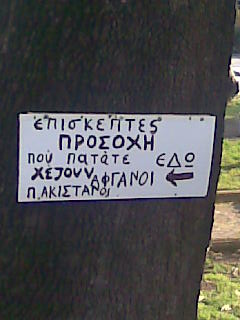 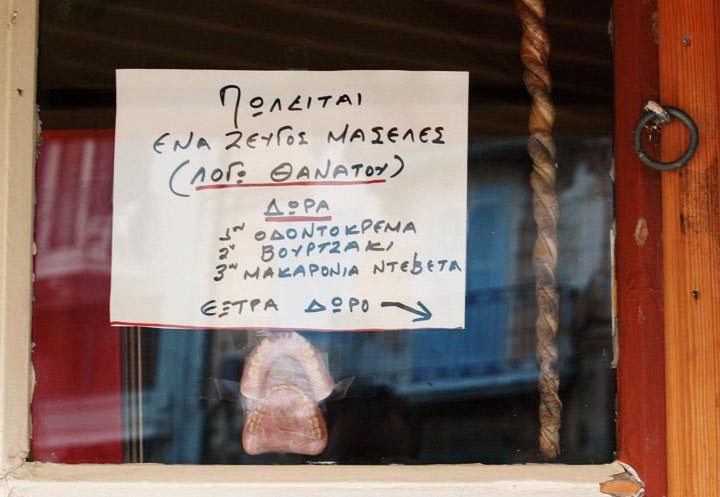 A couple of years ago, 800 buses appeared in the UK carrying the message. It was the result of a campaign  by atheist groups. 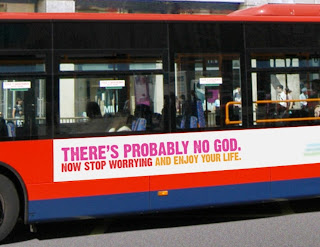 At that time, you may remember that a Christian bus driver refused to drive the bus. In one of my blog entries, I asked: 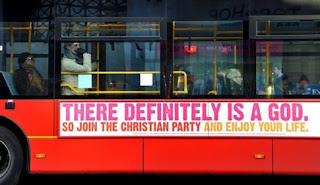 Do you see the irrationality in the second bus? This is what religion is about: irrational. It claims it has an answer but knows not why. And those who ask for explanation are simply being told: "shut up, it is so, because we say so".

Do you also see the irrationality in the second line of this message?

This is why religion (or any totalitarian system for that matter) is incompatible--cannot be compatible--with science which is supposed to be rational (albeit often practiced by irrational individuals.)
Posted by Takis Konstantopoulos at 23.3.11 2 comments:

In this older post, and its followup, I received several insteresting responses from creationists like Robert Sungenis and his supporters. The particular brand of creationists told me that they do not believe that the Earth is flat, but they believe it doesn't move and that it is the center of the Universe. They are called geocentrists.

Talk origins has posted a very comprehensive list of all creationistic claims. It is huge, but it is interesting to take a look to see what kind of absurd things people will come up with if they can't think independently. Here are some notable claims. See the above link for more:

Bible says the sun goes around the earth.
Relativity shows geocentrism is true.
The universe is 6,000-10,000 years old.
The earth is 6,000-10,000 years old.
Noah's ark has been found.
Intelligent design theory is scientific.
Mankind has existed essentially unchanged for billions of years.
Design requires a designer.
Complex organs couldn't have evolved.
Evolution does not explain language ability.
Humans have stopped evolving.
The second law of thermodynamics prohibits evolution.
Posted by Takis Konstantopoulos at 6.3.11 No comments:

Indeed, we read today, in a  BBC Berlin report:


German defence minister Karl-Theodor zu Guttenberg resigned after admitting copying large parts of his doctoral thesis. But why was he so keen to be a doctor in the first place?


In Germany, the "von" and "zu" denote aristocracy and he has both. And the word "Freiherr" means "Baron".

Don't forget that he won't lose his aristocracy titles. These were given to him at birth. Regardless of whether he deserved them or not. Neither will he lose his money. He's already rich. Too rich.


But if you want real clout in politics, being a doctor is desirable and that was his downfall. The title in front of even such a grand name is desirable, but not if it is the product of the work of others.

He will only lose one title, the DR, the only one that he tried to earn with his own work. Unfortunately, he didn't think that stealing a bit left and right was all that bad.


Indeed, he finally admitted that his zeal to add the extra two letters, Dr, in front of his name made him plagiarise his thesis by copying parts of it from the Internet.

Too bad, Mr. Baron Von and Zu. If you kept the title, it's not so much that anything bad would happen, but it's unfair for others who do have titles and have them for work they've done. Oh, by the way, many of those people were not fortunate enough to have a zu and a von. Some of them don't even have a single von or a single zu.

Titles should--in principle--represent something. I used to work for a university where it was possible to get promoted from senior lecturer to professor simply for administrative work, e.g. for serving as a chairman. In Academia itself, there are many instances were titles are abused. But it would be nice (wishful thinking) to have a reality check from time to time.

I used to daydream and ask: Would it not be nice, and fair, to give, from time to time, a Maths exam to all Maths professors and see if their performance is up to date? Or a Physics exam to Physics professors? This would be a reality check. And it should be fair.

A title, no matter how big it is, should not be big enough so that it hides inadequacies of its owner.
Posted by Takis Konstantopoulos at 3.3.11 No comments:

The Earth is still, and other creationistic crackpottery

Creationism comes in many forms. These people take a book, called תּוֹרָה, written long time ago by various tribes in the Middle East, containing collections of random stories, and want to use it as proof (or at least as evidence) of scientific facts. For instance, in one of the chapters of that book, we read [Psalm 19:5-7]:


5 It is like a bridegroom coming out of his chamber,
like a champion rejoicing to run his course.
6 It rises at one end of the heavens
and makes its circuit to the other;
nothing is deprived of its warmth.

7 The law of the LORD is perfect,
refreshing the soul.
The statutes of the LORD are trustworthy,
making wise the simple.

This thing was written some 3 thousand years ago and is supposed to provide evidence of geocentrism, i.e. that the Earth is the center of the universe and that it doesn't move or rotate.

An organization, called Catholic Apologetics International, consists of people who believe in these things and claim that good Catholics should understand that the Earth is still. (Bad Catholics can ignore this.)

Via Pharyngula, I was made aware of the Fixed Earth page. They go a little bit further claiming that not only the Earth does not rotate, but that it is only a few thousand years old, and that homo sapiens appeared right from the start, without any biological evolution. Oh, by the way, (their particular version of) god (but not the gods of other religious folk) exists.

As I said, creationism comes in many flavours, ranging from sheer nonsense as the above to more sophisticated-looking versions of it, such as intelligent design. The latter kind of creationists are using pseudo-mathematics to prove that god exists.
Posted by Takis Konstantopoulos at 1.3.11 No comments: