The night of  12 August 2012, there was a peak in the meteor shower of the Perseids. I happened to be in Santorini, so I set my alarm clock for 4:30. It was a perfect, cloudless night with almost no light pollution. So, not only did I enjoy a spectacular shower, but I also saw the rare alignment of 3 celestial bodies: Jupiter, the Moon and Venus. I turned my mobile phone camera to the sky and took a very reasonable photo: 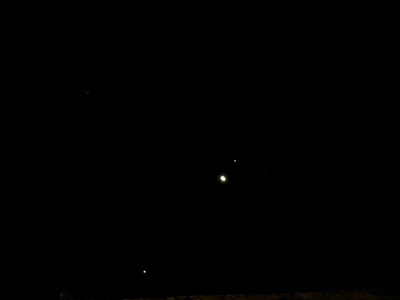 The moon is the brightest spot. Jupiter is just above and to the right of the Moon. Venus is the dot at the bottom. Upon enlarging the photo near the Moon-Jupiter area, one can see, to the right of the two bodies, Aldebaran, a red giant star, 65 light years away, which, compared to our Sun, is 44 times larger (linear scale). It represents a small version of what our Sun will be like in about 5 billion years: it will increase in size by a linear factor of 200. Of course, all life (on Earth) will be extinct by then.
Posted by Takis Konstantopoulos at 24.8.12 No comments:

In my previous posting I pointed out that, in the Dawkins-Pell Q&A session, George Pell thought that non-randomness is equivalent to "having a purpose". Here are some more of his blunders. He claimed that:


The discussion was full of such gems. It's a video worth watching. I'll leave it at that. If you spot more blunders, let me know.

Posted by Takis Konstantopoulos at 5.8.12 7 comments:

John Lennox, his aunt Matilda (and her pies), and Creationism

There are religious folk, like George Pell, who was my previous post's subject, who are decent enough to suggest (or appear to be doing so) that one cannot approach religion through science, that it is beyond it, something else, etc., although they fail to suggest what this something else is. Bill Hick, of Revelation TV is such a decent chap. He has all kinds of crazy beliefs, but he doesn't say that they are the result of a scientific process.

There are others, however, like John Lennox, Oxford Professor in Mathematics (Algebra), who are trying hard to justify religion through Science. In doing so, they use their scientific hat to appear that their arguments come straight from the centres of their prestigious scientific academic establishments. It is easy: most laymen have no idea what's going on in the Oxford Mathematics Department, neither do they know whether Lennox knows Quantum Mechanics or General Relativity. All that Lennox has to do is to pretend that his religious argument comes straight from his "academic works". People will buy that, even if he will never explicitly say so.

I have been in two talks by Lennox (one was a monologue, and the other a debate with Christopher Hitchens), both in Edinburgh. On both occasions he used the following argument, a version of the Pie Argument, as anadder calls it:


My aunt Matilda bakes a wonderful pie. I have two friends, a physicist and a chemist. I ask the chemist to analyse the pie and he tells me, very precisely, of the chemical composition of every part of it. I ask the physicist, who reveals to me all kinds of scientific facts about the pie. But then I ask both of them: "why did aunt Matilda bake the pie?" None of the two can answer the question. No matter how hard they try to analyse the pie, scientifically, they will never be able to answer the question.

(Ergo, god exists; but Lennox, being smart enough, leaves this conclusion to the audience.)

Bravo Lennox! What a wonderful argument. Even a child can come up with a better one.

Again, however, what Lennox's fallacy is, is that he is trying to attach a purpose to the baking of the pie, a purpose which is contained within the pie itself! For better analysis of this stupidity, read anadder.

Let me add that Lennox has declared himself not a creationist, not an intelligent designer. He does not, he appears to be saying, sympathize with these fundamentalists. And yet, this year, Lennox accepted the Phillip Johnson award. Philip Johnson is one of the most despicable creationists. His achievements include: he rejects evolution; he thinks that god can be explained scientifically; he is an AIDS denialist; he fires people who don't agree with him; he suffers from islamophobia; he is, in fact, one of the founders of the intelligent design movement--a creationist spin-off; he is advisor and co-founder of the discovery institute (also known as dishonesty institute); he supports teaching of creationism in public schools. More on Phillip Johnson, here.

Now, how can one reconcile (i) accepting an award that bears the name of one of the most vicious creationists and (ii) claim that you do not support creationism? I'd be really ashamed.

Posted by Takis Konstantopoulos at 5.8.12 No comments:

Cardinal Pell: "Could you explain what non-random means?"

In April 2012, the Australian TV hosted a Q&A session with Richard Dawkins and George Pell (Catholic Cardinal of Australia) as respondents. I watched the 1-hour programme on youtube. I recommend it, as an exercise to spotting a large number of rational mistakes by Pell. The most interesting misconception of Pell is that he does not understand the term "random". This is a serious mistake, because he has been all along thinking been basing his belief system on the following:


non-random =[equivalent to] having a purpose


random =[equivalent to] not having a purpose

I'll leave aside whether one can always be asking about purpose, and proceed in seeing, exactly, how the Cardinal reveals his inadequacy, clearly and wittingly. He starts by saying that religion is not science (correct) but people can use reason in religion, that they can they have, for example, to reason about the parts of science regarding evolution.The excerpt of the dialogue goes like this:
And then Dawkins goes on to explain that, in evolution, there is random genetic variation and non-random reproduction, which is why, as time goes by, animals get better at doing what they do. Natural selection, Dawkins says, is quintessentially non-random. And then he explains the obvious: that, in hindsight, it may appear that things (a bird's wing, a human's eye) have a purpose but this is a pseudo-purpose. Darwinian evolution is non-random evolution.

Ok, so Pell has had a misunderstanding of what evolution is about. But this is not his most serious mistake. After all, he claims, that a Catholic may believe in evolution if he or she likes. (Notice how he uses the verb "believe", as if there is a choice to believe or not a scientific fact; for instance, I have no choice in believing that gravitational force varies in inverse proportion of the square of the distance between two bodies, because it is so--period; whether I like it or not.)

His most serious mistake, which can (and I'm surely does) affect all his belief system is that he thinks that non-random is equivalent to having a purpose. It is so simple to realise the falsity of this, that it is painful to have to explain it, so I will leave it as an (easy) exercise. Pell makes this mistake because he badly wants to justify his views, so badly that he alters the meaning of things. Assigning purpose to concepts (such as "randomness") and to natural things (such as "the Earth") is an attempt to anthropomorphize Nature and the kind of Language we use to understand Nature. "God is created in Man's image" is what Pell's belief system is all about, and, therefore, he seems to believe that everything behaves in the same way that humans behave. The purpose found in human actions cannot be transferred to natural objects and concepts (teleology).

Not only the formula "non-random = having a purpose" is wrong because one can show that the two sides are unequal, but it is one which, simply, cannot be written down, like one cannot write down the formula "2+5 = the Moon's beauty".

A similar fallacy can be seen in John Lennox's Pie Argument, of which I'll say something next.

Posted by Takis Konstantopoulos at 5.8.12 2 comments: