I wrote about the Greek fascists in the past. But the situation in Sweden doesn't seem to be much better. According to a local newspaper, there are several groups of neo-nazis, as well as political parties, which go around causing trouble, from publicly exhibiting fascist symbols, often tatooed on their skin or shaved heads, to organizing demonstrations and distributing propaganda. In 2012, there were 1824 organized public activities by various neo-nazi groups in Sweden, whereas in 2013 the number went up to 2333. Their presence is not equally distributed. For example,according to Aftonbladet (a Swedish tabloid), the number of activities were
Skåne  115
Stockholm  66
Västra Götaland  62
Dalarna  60
Gävleborg 36
Uppsala  34
That means 10 events per month in Skåne, the south of Sweden, and 3 per month here in Uppsala. I have seen the neo-Nazis downtown and I have been told that Greek neo-Nazis have been flown in to show their support. Some of those groups have a very scary ideology.

Neo-Nazi fascistoids are on the rise in many places in Europe, from Ukraine, to Greece, to Sweden. Apparently, they all support one another, and, in some cases, like in Greece, the social situation is such that they have a lot of support. Statistics are not clear in Sweden, but it appears, from the time when Breivik massacred 80 innocent people in Norway, that the numbers are not small at all.

Posted by Takis Konstantopoulos at 29.3.14 No comments:

Making fun of geocentrists (and flat-earthers)

I admit it I find it amusing to be making fun of "scientists" who are trying to prove stupid things. What is extremely interesting is to see the responses of them and their followers. My favourite crackpots are the self-proclaimed geocentrists. Their head is someone called Robert Sungenis who paid some money to a place called Calamus Extension College offering degrees (by correspondence) on Holistic Studies, Homeopathy, Contemporary Spirituality, Regression and Reincarnation Studies, etc.,  and obtained a PhD in geocentrism!

Armoured with the panoply of such advanced studies, he started a mission: to prove that the Earth does not rotate and that it is fixed at the centre of the Universe!

He has even written a "scientific" book titled Galileo Was Wrong described in this way:


Galileo Was Wrong is a detailed and comprehensive treatise that demonstrates from the scientific evidence that heliocentrism (the concept that the Earth rotates on its axis and revolves around the sun) is an unproven scientific theory; and that geocentrism (the view that the Earth is in the center of the universe and does not move by either rotation or revolution) is not only supported by the scientific evidence but is admitted to be a logical and viable cosmology by many of the world's top scientists, including Albert Einstein, Ernst Mach, Edwin Hubble, Fred Hoyle and many more.

I admit that I secretly enjoy seeing the reaction of those lunatics. I wrote about them before, and did manage to attract the attention of Sungenis himself. But when I pointed out his qualifications he kept silence. I, too, would be ashamed to be associated with Calamus Extension College.

There used to be many people believing that the Earth is flat (i.e. approximable by a manifold with zero curvature). I quote from wikipedia on their beliefs at the beginning of 20th c.:


Wilbur Glenn Voliva, who in 1906 took over the Christian Catholic Church, a Pentecostal sect that established a utopian community at Zion, Illinois, preached flat Earth doctrine from 1915 onwards and used a photograph of a twelve mile stretch of the shoreline at Lake Winnebago, Wisconsin taken three feet above the waterline to prove his point. When the airship Italia disappeared on an expedition to the North Pole in 1928 he warned the world's press that it had sailed over the edge of the world. He offered a $5,000 award for proving the Earth is not flat, under his own conditions. Teaching a globular Earth was banned in the Zion schools and the message was transmitted on his WCBD radio station.

Unfortunately, they have been in rapid decline ever since.  They established a Flat Earth Society in 1956 and made some hilarious remarks:


The idea of a spinning globe is only a conspiracy of error that Moses, Columbus, and FDR all fought… If it is a sphere, the surface of a large body of water must be curved. The Johnsons have checked the surfaces of Lake Tahoe and the Salton Sea without detecting any curvature.

Nowadays, there is a certain Daniel Shenton who proclaims that nobody has proved that the world is not flat:


I haven't taken this position just to be difficult. To look around, the world does appear to be flat, so I think it is incumbent on others to prove decisively that it isn't. And I don't think that burden of proof has been met yet.

Posted by Takis Konstantopoulos at 27.3.14 No comments:

Alcohol in Sweden is very much restricted. There is only one company, Systembolaget, from which one can buy alcohol. And it only opens certain days, excluding Saturday afternoons and Sundays. Also, their prices are extremely high and the selection limited in quantity and in quality (which is to be expected if there is a monopoly). I'm being told that things are good now because, in the not-so-distant past, that company was allowed to be open only one day per week, resulting in huge queues consisting of people taking time off work in order to buy their wine.

The company claims that the only reason they exist is because they care about people's health and they have conducted scientific researches to show that if the monopoly seized to exist then catastrophic things would occur. They present their case here in flash form. The page contains the whole scientific report too. Here are some of the "catastrophic" consequences that would result if the monopoly seized to exist. (Images are captures from their page.) 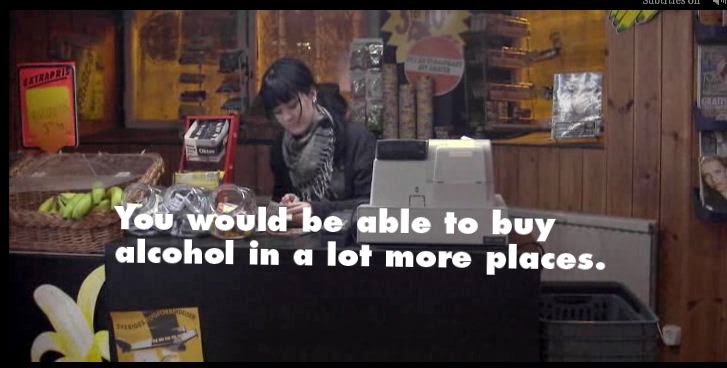 So? What's wrong in being able to buy alcohol in more places? And what's wrong in buying wine where I buy my food? I DO want both of them. But, according to Systembolaget, these are among the dire consequences of abolishing the monopoly. Totally absurd, isn't it?

In another place, they claim that

They don't explain, but, presumably they mean deaths occurring by drunk drivers. So, I suppose, they care about maintaining safety on the road. This is good. I am all for that. However, it's not entirely right that they care about safety. To wit, of all the countries I know, Sweden is the only one where you can drive your car and speak on your cell phone at the same time. It's ok for drivers to chat, text, whatever. It's funny how such an obviously dangerous activity is legal, while, at the same time, consumption of half a bottle of beer will get you into trouble while driving because the alcohol limit is zero. Although I'm not an expert in these things, I maintain that speaking on the cell phone, like many idiots around, is far more dangerous than having drank half a bottle of beer. This is, then, dishonesty.

Talking about animals, and having read this about fish, I remembered last September's story about the holy Swedish salmon or Jesus fish, as it was baptized.
A fisherman in Gothenburg caught this salmon and started shouting out of religious joy. A certain Mr Ludwigson was summoned and verified the holiness of the fish: "I've been in this business for 30 years and have never seen anything like it." The salmon was initially scheduled for a holy supper. But then this was deemed a sacrilege. So a tour of it was planned. First in Malmö were it was put on display in the supermarket. Then in Gothenburg for public viewing at the Nordstan shopping center. I don't know what happened after that.

Swedes are supposed not to be too religious. But, especially in Uppsala, there are many fundametalist Christians, e.g., pentecostals, and mormons and what have you. Once in a while, they appear at the center of town and if you happen to pass by you feel like you're in a bible belt. They preach and shout and try to convert and proselytize and so on. Once in a while you also find some crazy religious acts too. The worst of those fundamentalist Christians are in par with their American peers. In fact, they are the same. This is religion imported to Sweden from the Bible belt.

What's next in the holy fish business? The Atlantic flounder is commonly known as Helgeflundra in Swedish (i.e., Holy Flounder). Despite its name, there is no known report of it appearing with a holy sign. Perhaps it'll come next. This is my prophesy.

Posted by Takis Konstantopoulos at 1.3.14 5 comments: