This is a reposting of an older post. Sometime ago, I visited John Lennox's site and made, among other things a comment on the irrationality of choosing religion A vs B and pointed out that Lennox's religion is probably the result of his upbringing. One responded replied thus:


Christianity, of course, provides the best explanation and best evidence over any other religion.

Of course, statement proved, case closed, QED. Don't you love this kind of "rationality"? What is worse is that the respondent is not even aware of the ilogicalness of his claim. I wanted to respond, but Lennox has disabled responses.
Posted by Takis Konstantopoulos at 22.7.12 No comments:

In the Russian Orthodox Chruch

Once upon a time, we used to think that there is one country in the world where religion was playing little role. Yes, that was Soviet Union. Of course, we didn't know that religion cannot be eliminated by fiat. We were naive. We were young. We did know, however, that religion and Soviet do not mix. No proper communist would ever go to church. Certainly not a KGB agent.

But then, one day, things changed. They changed fast. We learned that the Orthodox Church was playing a big role in ex-Soviet Union. That people were queueing in order to enter churches. That the state had endorsed Orthodox religion so much so that religion and state were almost inseparable. Just like in Greece. (Except that, in Greece, there had been no divorce period: religion and state have been living in harmony for a couple of millennia or so.) Even ex-KGB agents became religious.

They had to, I guess. I found this bizarre, in the beginning. But not any more, of course.

And now, some Russians, a minority of course, are protesting. Some, quietly, very quietly. They fear that if they protest openly they might go to jail. Imagine the contrast: 30 years ago, you could receive a Lenin medal for advocating the evil of religion. Nowadays, you just keep it to yourself. You certainly must not offend the State leader. This is a faux pas.

Of course, I know that these silly girls did not have religion as their primary target, but, rather, wanted to pass on a political message. Yet, they chose a church to perform their gig
which I found not distasteful; perhaps a pleasant interruption of the boring church rituals. They were put to jail. They face up to 7 years imprisonment. Some describe them as naive. They are. But they have to be naive, young as they are, in order to attempt this.

Posted by Takis Konstantopoulos at 21.7.12 No comments:

Some time ago, the famous Dadaist/surrealist artist Marcel Duchamp wrote a note of admiration on the work of Takis, pointing out, in particular, his oeuvre on magnetic fields: 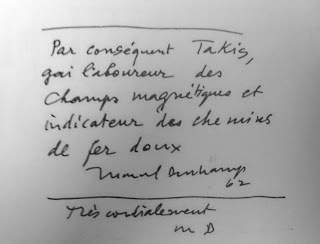 Of course, he is not referring to me, but to Takis, the artist  whose work can be seen in La Défense, Paris. He  used magnetism as a tool for his installations. I remember some of that from the Berkeley Art Museum. I also remember a stamp, issued by France in 1993, exhibiting a ... rather abstract work by Takis. I used to own the stamp.
Posted by Takis Konstantopoulos at 19.7.12 No comments:

As "a Nadder" puts it, the following video is a hilariously inept and patronising ad by the European Commission, "trying" to encourage women to pursue careers in science. It's so inappropriate that makes you wonder if those guys have any brains at all. Here it is:

So not just Sweden, but the whole Europe is obsessed with gender. They try to come up with quick and dirty fixes for, say, the discrepancy between the number of women and men in the university (or in engineering, science,...), that the results are often so demeaning to the women themselves, let alone that it is more scientific to watch MacDonald's hamburger ads than the video above. Just plain stupid.
Posted by Takis Konstantopoulos at 2.7.12 No comments: