November is almost gone, and I have posted almost nothing. Too much work, I guess. Here's what caught my attention recently. The term "flip-flopping" of politicians, with proof. There we go (source):
1) Barack Obama.
2) Mitt Romney.
Posted by Takis Konstantopoulos at 30.11.11 No comments:

Windows of shops in Uppsala are not quite the most attractive sights of the town. If you have a visitor, don't take her (or him) for window shopping, (unless they happen to have fallen in coma in a remote Soviet village in the eighties, and just recovered from it). Many a times, they consist of nondescript arrangements of random objects, loosely resembling the products of the shop, e.g. a few scattered hairbrushes (often with hair) in a beauty salon, or dull collections of dusty clothes in a neighbourhood fashion shop, and so on--you get the idea. I will have to expand on this in a future email, because looking at shop windows in Sweden is like a time warp. It's like going back to the seventies.

But the most interesting kind of windows are of funeral offices. Typically, we don't see much of decoration in a funeral office window. In most places I've been to they are plain, simple or have religious messages, depending on the type. But in Uppsala (and I think, more generally, in Sweden) some (or all?) funeral offices have very interesting windows. Here is one from Uppsala: 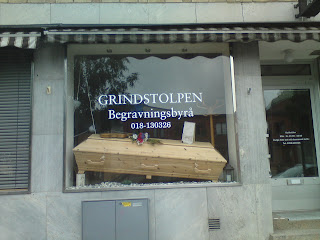 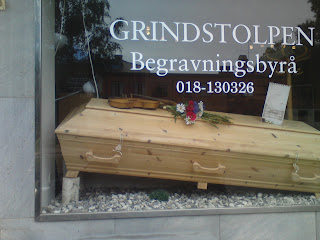 It advertises its products: coffins. A closer look shows the "interesting" and "thoughtful" decoration: scattered stones underneath the coffin, a little (plastic of course) green bush, one side of the coffin standing on a (presumably empty) used can of sardines, a careful arrangement of (yes, you guessed it, plastic) flowers on top, next to a violin (not a Stradivarius, I'm sure). The coffin is locked (who knows why?).

"Interesting", I thought, when I first saw it. And I had to stop my car and take a picture.
Posted by Takis Konstantopoulos at 15.11.11 1 comment: